I’ve been using Radiopopper JrX Triggers for a while now, and one of their more useful features is remote power control. They can remotely control the power level of up to three groups of flashes, provided the flashes support the older style of TTL: this works with Nikon flashes up through the SB-800, Canons up through the 580EX, and probably others I’m not aware of. The catch is that to make it work, you have to attach your flash to their $30 RPCube. With Nikon flashes, you can make it work by building custom cables with 3.5mm on one end and Nikon’s TTL connector on the other, but those are expensive to build and easy to lose. My solution is to build a 3.5mm jack right into the flash sop you can connect it directly to the Radiopopper with cheap cables. I’ve done this with both SB-25 and SB-26 speedlights before. In this post I’ll be showing the modification of an SB-25, but the technique is not difficult to apply to an SB-26.

The mod is relatively simple, but you’ll need basic soldering skills. In addition, my method removes the auto flash sensor to fit in the 3.5mm jack, so you won’t be able to use the auto mode afterwards. Of course, messing around inside a speedlight can be dangerous, so I’ll start out with the obligatory disclaimer.

WARNING: The inside of your flash contains a very large, very dangerous capacitor. Take caution opening and modifying the flash. You are solely responsible for any damage you cause to your flash or yourself.

If you want to do this yourself, you’ll want to start out by discharging your flash as thoroughly as possible. The capacitor inside is exceptionally dangerous, so you don’t want it charged while you’re working. I just put the flash in manual mode and set it to full power. I slide the battery door down but hold it in place, pop the flash and release the battery door immediately afterwards to keep it from charging back up. Once you’ve got the batteries out, turn the flash head sideways to get access to the screws that hold the body together. You need to undo two screws on the same side of the body (on opposite sides of the head), it doesn’t matter which two. 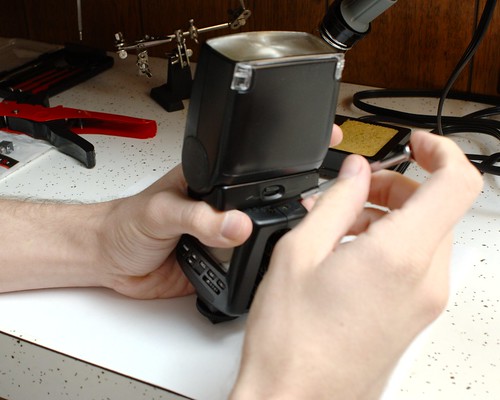 Once you’ve got those two screws undone, you can turn the flash over and unscrew the four screws attaching the body to the foot. 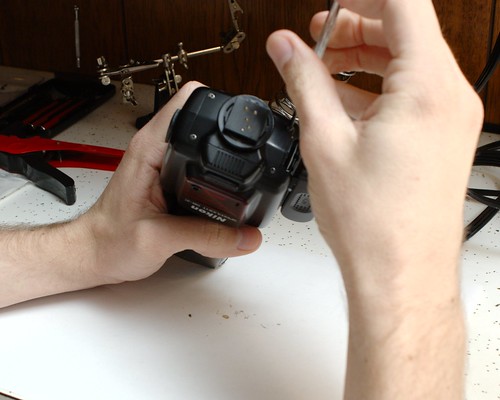 With those undone, the two halves of the body will be free to seperate. Pull the front of the body off. The battery door will come off, just set it aside for now. 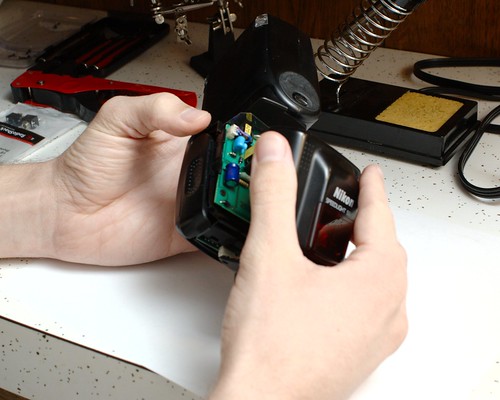 You’ll see several cables attaching the front of the shell to the insides of the flash. Disconnect two of them: the one that attaches to the middle of the front of the circuit board and the one that attaches to the bottom of the circuit board. The other cables will be very tricky to replace if disconnected, so leave them in place. 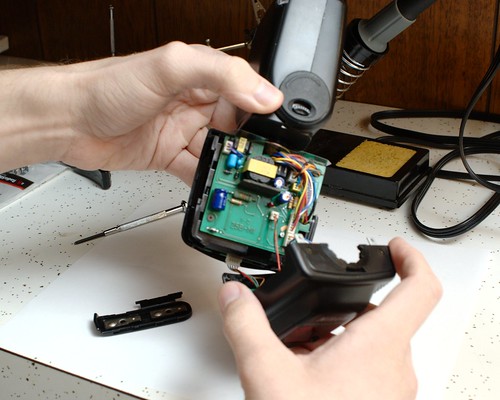 With the front shell partially disconnected, you can now remove the foot entirely. There are no screws involved, it will just click out of place. 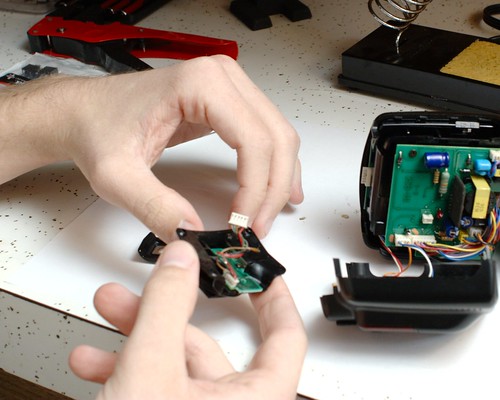 Now pop the red piece of plastic off of the front shell. From inside you can easily push its edges out with a screwdriver, they’ll pop out if you push them inwards just a little bit. 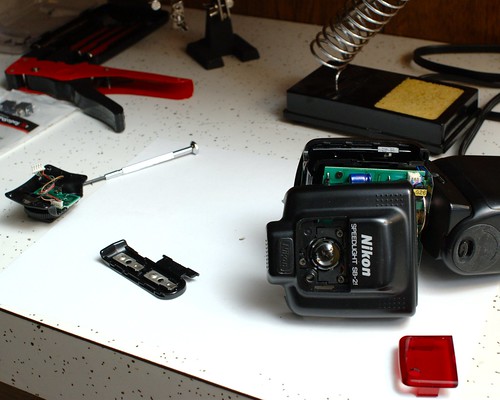 That glass dome you see in the front is the sensor for the auto flash mode. To remove it, just undo the three screws on the front and it will come right out. This is where we’ll install our 3.5mm jack later. 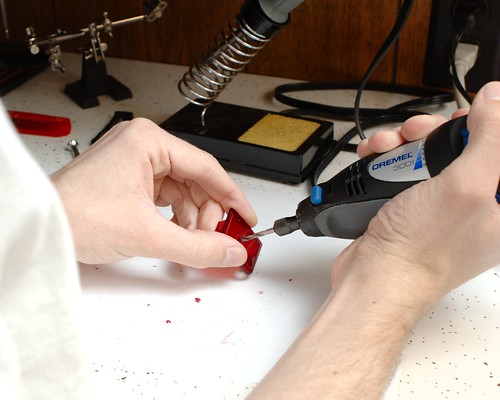 Next you’ll need to drill a hole in the red plastic piece for the 3.5mm jack to fit through. 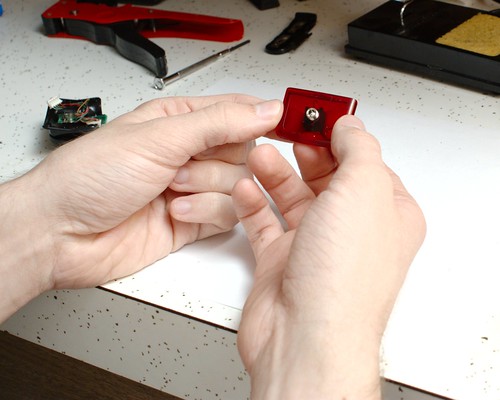 Drill until the hole is just big enough to fit the jack through, and then set the plastic piece aside. For the next step, you’ll want to reference the pinout for the Nikon hot shoe (second diagram in the linked forum post). Looking down on the circuit board from the inside, the pins of interest will be the center pin (trigger), the lower right pin (quench), and the tab to the upper right (ground). Desolder each of these pins, making absolutely sure that you have the right ones first. 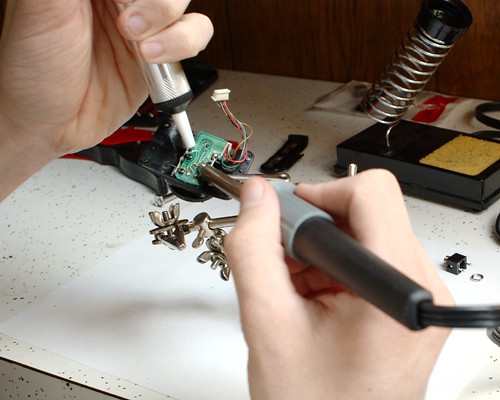 Once you have them desoldered, you need to cut three wires long enough to make it from the foot up and out through the body (I cut mine about five or six inches long to start with). Each wire will need to be soldered to one pin. 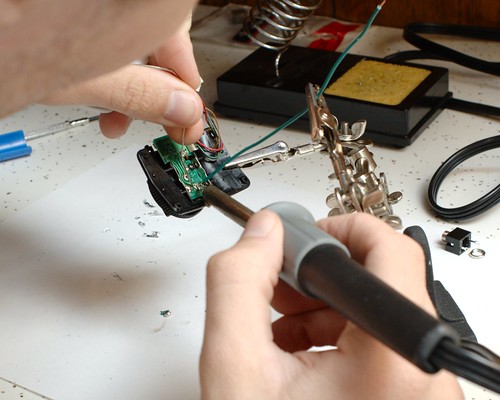 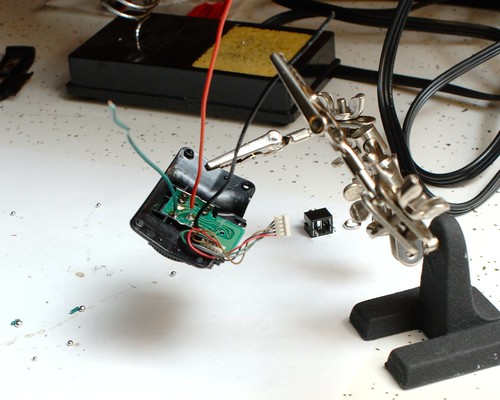 Once the wires are attached, plug the shoe back in to the bottom of the flash’s main circuit board and press the shoe into place. 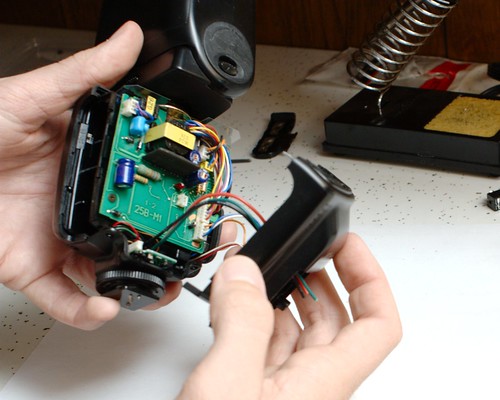 Reassemble the entire shell, running the wires out through the hole in the front. You may want to route the wires to one side or the other going up from the foot into the body so that they don’t get crushed by the small circuit board mounted on the front shell. Don’t forget to put the battery door back in its place before pressing the two sides of the shell together. Also note that if the flash head at any point became dislodged, you’ll need to hold down the horizontal locking button and press it firmly back into place before you’ll be able to get the shell back together. 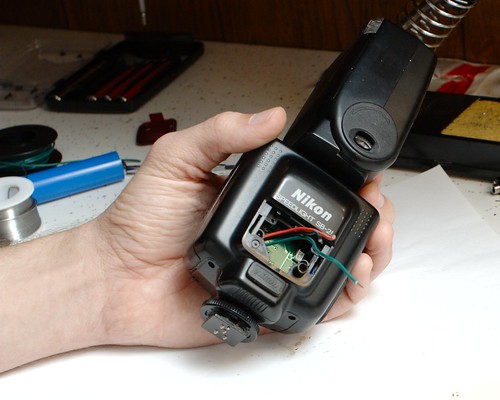 At this point I cut the wires so that I had about an inch and a half to work with out the front of the flash, then stripped them, tinned them, and bent the ends into hooks. You’ll need to connect these wires to your 3.5mm jack: ground goes to the base of the plug, trigger goes to the tip, and quench goes to the middle. I strongly recommend just hooking the wires loosely into the jack and testing the entire unit before soldering anything. 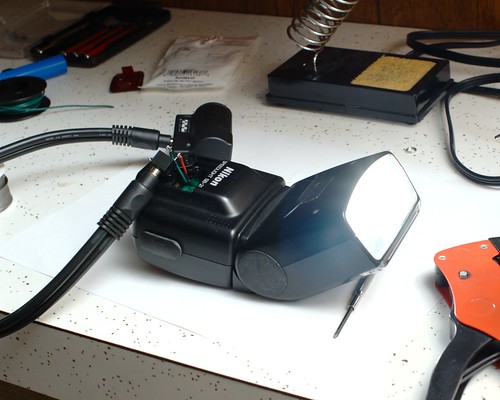 Remember that you must put the flash in TTL mode in order for remote power control to work. If the wires are connected properly then you should be able to control the flash’s power with the dial for the receiver’s group on your transmitter. 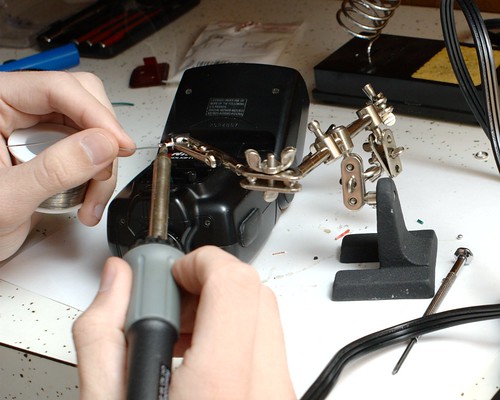 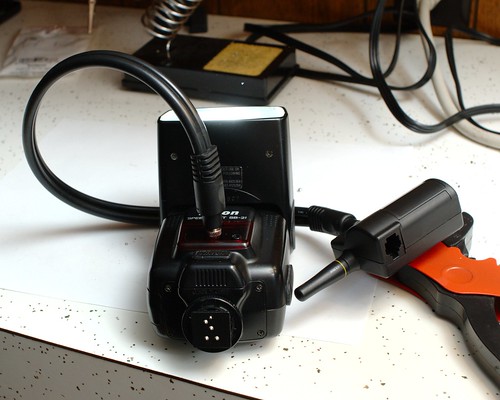 If everything is assembled correctly, you can now plug your flash directly into a Radiopopper JrX receiver with any 3.5mm cable and get remote power control and triggering. Be careful yanking the cable out of the flash, as the plastic plate may come out with it if you’re not gentle enough. If you’re really worried about this, you can superglue it to the flash body, but I prefer to be able to open it in case I ever need to get in and repair something in a hurry (this actually happened with the first flash I did this to).

This technique will work with the SB-25 and SB-26, and I wouldn’t be surprised to find out that the SB-24 has a similar internal structure, although I’ve never actually seen one before. The same general technique should work for just about any Nikon flash up to the SB-800, but figuring out exactly where to put in the 3.5mm jack is left as an exercise to the reader. Note that this technique will not __work with Canon flashes as-is, because they use a different type of TTL control signal. There is a circuit floating around that will allow you to connect a Canon flash directly to a Radiopopper JrX, but I don’t know if it would be feasible to construct the whole thing inside the flash itself: you might be stuck with an adapter.